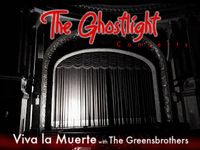 Ghostlights are a tradition almost as old as theatre itself – they light the stages when there are no performers, keeping the spirit of the theatre alive. After six months of just our ghostlight, we are thrilled to replace it with live performances on the Carolina Theatre stage! Seating will be available, but will be limited to 25 guests for each show, per government mandates. All guests will be asked to sign a liability waiver, and wear a face covering unless seated in the Auditorium.

Tickets are $20 plus 6.75% NC Sales tax. Tickets include one admission, one concessions item and one beverage. Sorry, draft beer and popcorn not currently available.

In 2019 Viva la Muerte was selected by YES! Weekly’s readers as THE BEST ORIGINAL BAND IN THE TRIAD (Greensboro, High Point, and Winston Salem). VLM was born as a fiddle and two guitars back in 2005. In 2012, VLM expanded their sound and launched a Kickstarter campaign to raise $10,000 for their first album, “All the Birds.” Critical acclaim for “All the Birds” came from all over the country. “The album screams with creativity,” said Amplifier magazine. “It’s a beautiful piece of work,” wrote Jeri Rowe of The Greensboro News and Record. Even David Gans of Tales From The Golden Road took note, writing, “Very nice variety of feels and flavors here. Hearkens back to the 60s in the best possible way. Armstrong’s voice brings to mind Jim Morrison but without the false menace.”

In 2015, VLM launched a second Kickstarter campaign for their second album, “The Eyes of Men,” and again raised more than $10,000. They are currently at work on their third album, “Storm Country,” and were just this year featured by Relix Magazine as a “Band on the Rise.” VLM can be found at www.vivalamuerteband.com

The Greensbrothers make music like distilling moonshine in a top hat. This quintet blends crystal clear melodic improvisation in a dirty copper still of greasy deep-pocket polyrhythms, creating a flavor that is unforgettable, complex and burns like hell. They ferment their musical mash and cook up musical firewater served in a blend of songs intoxicatingly familiar, yet never quite the same.

Jason Blalock, Bob Worrells, Tom Royal, Jeff Yetter, Manny Carrasco and Will Baucom, aka The Greensbrothers, got together when Folkswaggin’ alums Bob and Jason were asked to play the first Lonely Goat Family Reunion at Hodgins Valley Farm, the site of many Smilefest concerts in the 1990’s. This could easily have become a nostalgia act, spewing the same old songs the same old way. But this group never does things the easy way. And one of the joys they each find in making music is the exploration to find the new.

Bob, Tom, and Will had been in an Americana group called The Radials and gelled over several years of playing. Jeff, having spent his time honing his funk chops in the band Doby, was a natural fit for this project. Jason took a break after Folkswaggin’ to raise his family but never stopped singing and playing. The Greensbrothers have been gathering every Thursday for several years. Each jam session is an adventure in potential, and each show an event. Nothing is off limits within the vastness of each player’s songbook. Whether it’s a cover song or an original, their influences and sounds come from the likes of The Allman Brothers Band, Elvis, Van Morrison, The Grateful Dead, Booker T & The MGs, John Prine, Donovan, The Band, Bill Monroe, The Velvet Underground, The Meters, Bob Dylan, Steely Dan, The Talking Heads, Dire Straits, and many, many, many more.

Please bring your mask/face covering as it is required to wear unless you are seated in the Auditorium. We will have complimentary disposable masks available if needed.

The front doors will open 30 minutes prior to scheduled curtain time. Please bring your email receipt for entry, and your Waiver of Liability with you. This is not a public performance so only ticketed guests will be allowed in, and there will not be any walk-up sales. But don’t worry, we will have a list of those who have purchased tickets if you leave your email/receipt at home.

Staff will greet you inside the Lobby doors (with face coverings). Temperatures may be taken at this time. You will be given a drink coupon (or coupons if you have pre-purchased additional beverages). Our staff will assist you with your beverage and concessions selections. We will have a variety of bottled beer, wine, soft drinks, tea and water, as well as an array of candy. Unfortunately, popcorn will not be available.

Please maintain “social distancing” at all times. This is a general admission show, and with only 25 tickets available and over 700 seats downstairs to choose from, we will not be blocking off seats, but we do require you to leave two empty rows and at least three empty seats between parties. Staff will be available for any seating questions.

Remember to use one of the many hand sanitizing stations throughout the Theater. They are there for your safety and convenience.

This event is being videotaped for rebroadcast at a later date. Your entry acknowledges your consent to use your image should it be captured on video during the performance.

Tickets are $20 plus 6.75% NC Sales tax. Tickets include one admission, one concessions item and one beverage. Sorry, draft beer and popcorn not currently available.